T-shirt estimation is the idea, that estimation of user stories or tasks should be done at a rather rough level (t-shirt sizes) rather than precise hour or even storypoints. The idea is to save time, frustration and avoiding a false sense of knowledge by not trying to be more precise than actually usefull. It often turns out to be rather more precise than expected and with a good knowledge-pr-time-spend ratio.

This post is a practical guide of how to do t-shirt estimation. It is meant to be a practical how-to of one of my favorite simplications of one of the most time-wasting activities in larger organisations.

First a few things to notice about estimates.

Looking at data we can see that most estimate distributions look something like this: 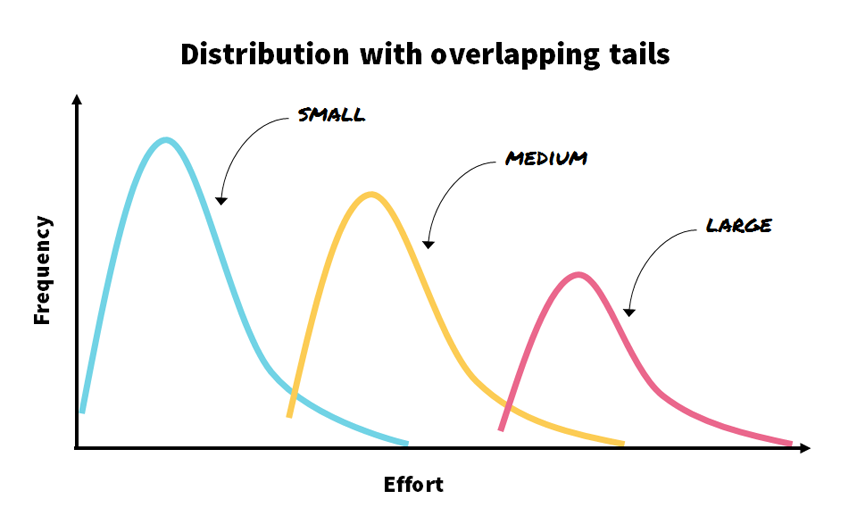 And it is not only in theory. Here is a picture how a month worth of done features distribute in terms of cycle time. Even from a rather small sample it is clear that the tasks are distributed in three distinkt groups. 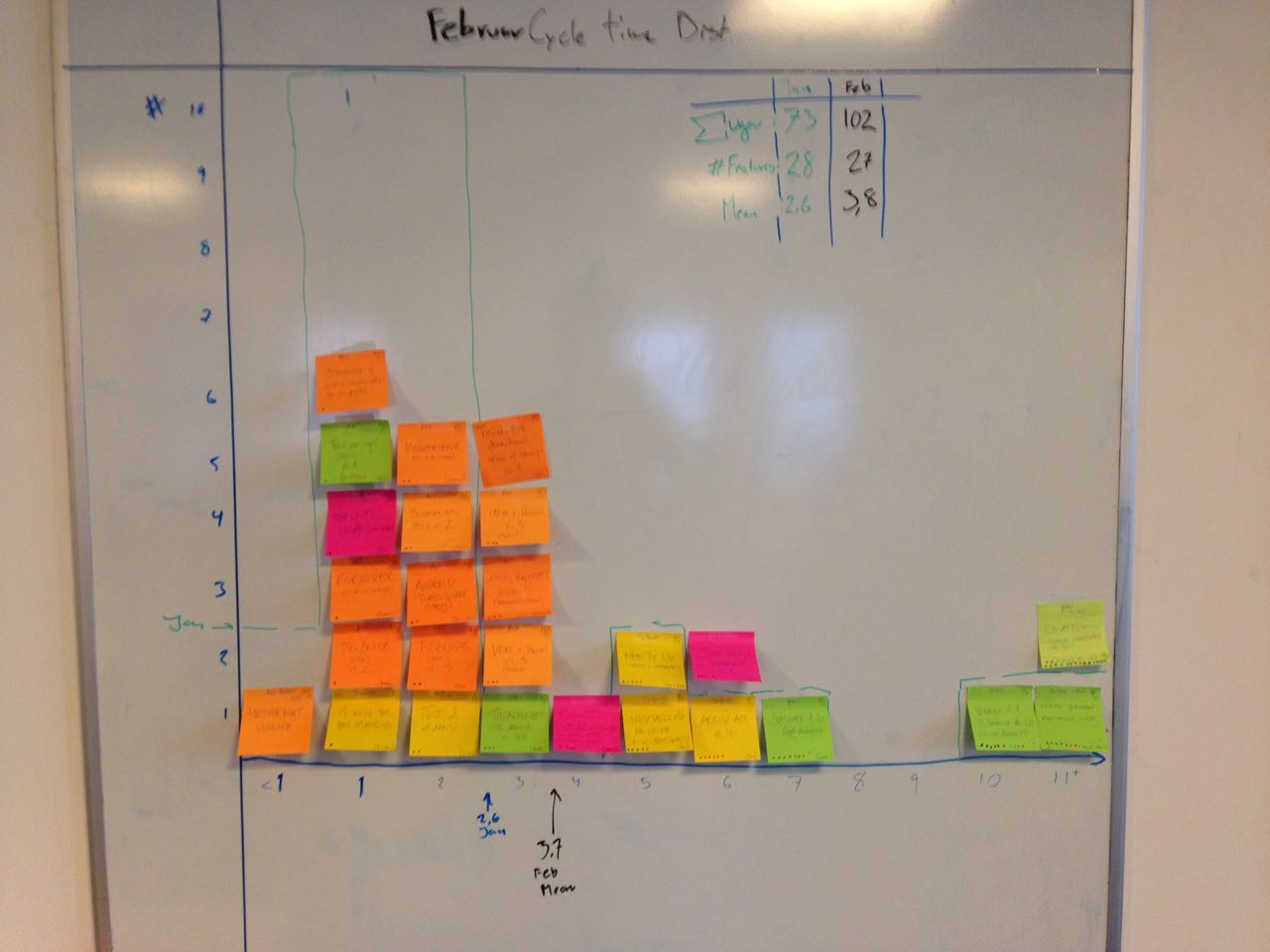 As you can see there is a tail on the distribution of each T-shirt category which basically means that some Small will take longer than the average Medium and so on. While it is possible to adjust the distribution the tail will remain since it is “what we don’t know we don’t know” that causes it and that simply cannot be uncovered by upfront analysis.

Why estimate at all?

From a lean perspective estimation is a wasteful activity – no doubt about that. So what are the arguments for investing time and money in an activity that does not provide any direct value to the solution?

Using story point based T-shirt bucket estimates we optimize for the goal of predictability and alignment without the unfounded promise of individual accuracy. Basically we only allow estimates to be placed in one of the following buckets:

T-shirt sizes are used because they make it quick and easy for the team to understand the buckets they are allowed to use (there is no such thing as a S/M bucket). A small number of buckets communicate that uncertainty is expected (it is there anyway) and dramatically speeds up estimation sessions. Points are added to the T-shirt buckets because they exactly indicate the ratio between them and are used for price per point calculations and velocity:

This way we keep all estimates comparative. If you are estimating a new project you start by finding a couple of representatives for T-shirt buckets S, M and L and then line the others up accordingly – it really does not take much time and the suggested point ratio between the T-shirt sizes is typically a pretty good fit.

But what if you really need the price?

To turn T-shirt estimates into a budget and time forecast we use the concept of a price per point. This is done simply by looking at historical data and dividing money spent by the number of points finished. How to build a price per point assumption for new projects is covered in the next section.

Working with a price per point as the central figure provides numerous benefits:

Do however remember that adding more people does increase spending but will also make your price per point rise – at least for the short term.

When forecasting the price per point for new teams, new technology or new products, you can use triangulation of estimates. I nomally use a spreadsheet with some build in formulaes help do it fast an effectively but it would need instructions and explanation to use it meaningfully. The idea would be to do:

and use these on the t-shirt estimated user stories with a blend of how much you want to weight the estimation types. The point of this would be to not trust only one source for an reasonable ratio, but to also distribute that estimate reliablity.

However, no matter what you do in this situation, your estimates and forecasts will be more uncertain. Not because you are doing something wrong, but because the environment around you is unpredictable.

But then why do it at all, if the environmetnt is so uncertain? Three main reasons:

Further simplication of the T-shirt sizes

In most practical situations I actually prefer only to use

It turns out that it often plenty of precision and the estimation really fast. There is also room for extending with the “XS” and “XL” as needed. However, do not let the ease of estimation divert you away from actually discussing the complexity of a task - there can be great value in discussing the task in order for the team to actually understand the purpose and implications.

Feb 2, 2019
Recently my team was tasked with changing the default VxLAN port, used by OpenShift to create SDN networks for the individual namespace (Project). Problem was, that we needed to do it on a running cluster, with no downtime. Why would you ever want to do something like that?! Well… we really did not want to do that. We were however forced by VmWares, highly questionable, implementation of VxLAN in there NSX product.

Include script function library in Jenkinsfile

Jun 6, 2017
When writing scripts for Jenkins pipelines for our different development teams using our OpenShift platform we found that maintaining individual Jenkinsfiles for each project quickly gets messy. Surprise! #Simple lib file for jenkins functions - and how to load it Our current solutions is to create a general purpose Groovy file with the functions and let individual pipelines put together their stages by piecing functions together. This can be done with something like this:

May 5, 2016
T-shirt estimation is the idea, that estimation of user stories or tasks should be done at a rather rough level (t-shirt sizes) rather than precise hour or even storypoints. The idea is to save time, frustration and avoiding a false sense of knowledge by not trying to be more precise than actually usefull. It often turns out to be rather more precise than expected and with a good knowledge-pr-time-spend ratio.

Apr 4, 2016
Story mapping is a tehchnique used for both scoping and release planning of new projects and enhancements to existing products. It is very much inspired by the work of Jeff Patton made popular through his 2008 blog post “The new backlog is a map”, but in an adjusted form and combined with journey mapping practices and techniques. This post is a practical guide of how to conduct a story mapping workshop with lists of things to rememer and do.